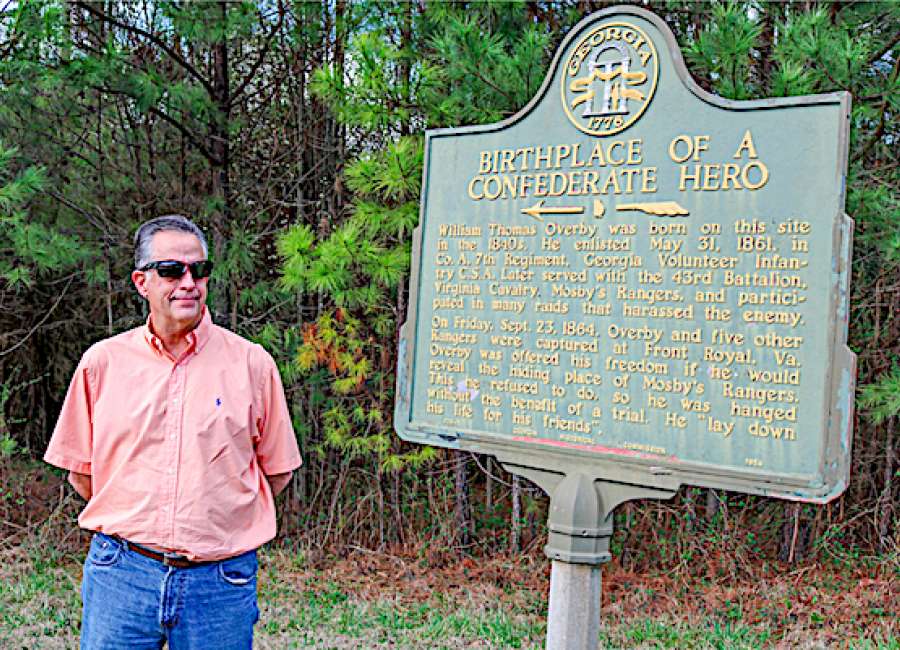 Mike Christie stands next to historic marker William Thomas Overby. The marker, which sits on land that was once the family’s Overby plantation, incorrectly describes the land as Overby’s birthplace. The Overby family were originally from Virginia and moved to Coweta. The land, which Christie said could include a cemetery, was recently dezoned by the Coweta County Commission.

The Coweta County Commission has approved a rezoning that will allow building on a plot that was part of the Overby family plantation, but neighboring resident Mike Christie says the area should first be checked for graves and historic artifacts.

Commissioners recently voted in favor of rezoning the last undeveloped portion of the William H. Overby plantation on January 23. Christie, who lives nearby, said he found nails and other items when he was gardening and was concerned the plot would include the graves of slaves who lived and worked on the plantation before the Civil War.

“If they can’t find anything, I’m sorry I raised a stench,” Christie said. “But I still think it’s the right thing to do, bring in professional archaeologists who have the technology to determine what’s there. Are we going to cement the slaves that might have been buried there? ”

The land has a state historic marker that incorrectly describes the property as the birthplace of William Thomas Overby, who has been nicknamed “the Nathan Hale of Confederation”. According to Carolyn Cary, author of “William Thomas Overby: Proud Partisan Ranger,” what is currently undeveloped on the original 300 acres is private land owned by a current resident of Newnan.

Cary is the author of the book which was published in 2004 on William H. Overby’s son, William T. Overby. The book provides an overview of how the Overby family moved from Virginia to Newnan in 1837. Patriarch Overby is described as a farmer and his son was a Confederate war hero.

According to the federal censuses of the United States of 1850 and 1860, 15 slaves lived on the Overby property. An article on the ABCNews website stated that slaves were typically buried in pine boxes on plantation land, usually in graves that were not marked.

For the property, the Coweta County Planning Department has only building permit documents that date back to 1963.

“All I’m asking is a second look here. I think we owe it to the Cowetans who are living today and in the future the lessons we can learn from it. Whether it’s big lessons or sad lessons, we still have to capture and learn from them, ”said Christie.

“I’m a little shocked that this is an overwhelming rezoning on a historic property,” said Christie, adding he was “appalled and disappointed, to be honest.”

Christie, also from Virginia, describes himself as a “history jerk” and a “devoted gardener” who finds old bricks, nails and other old materials in his garden. His house borders the recently rezoned land.

Christie attended the county meeting when the zoning was approved. He said he would like the land to be transformed into an educational or historical center.

According to Coweta County Commissioner Rodney Brooks, since the land is privately owned, there is nothing the county can do.

“I don’t want to stop progress or developments,” Christie said. “I just want someone to do their due diligence and send some sort of archaeological study and find out if there is a cemetery there.”