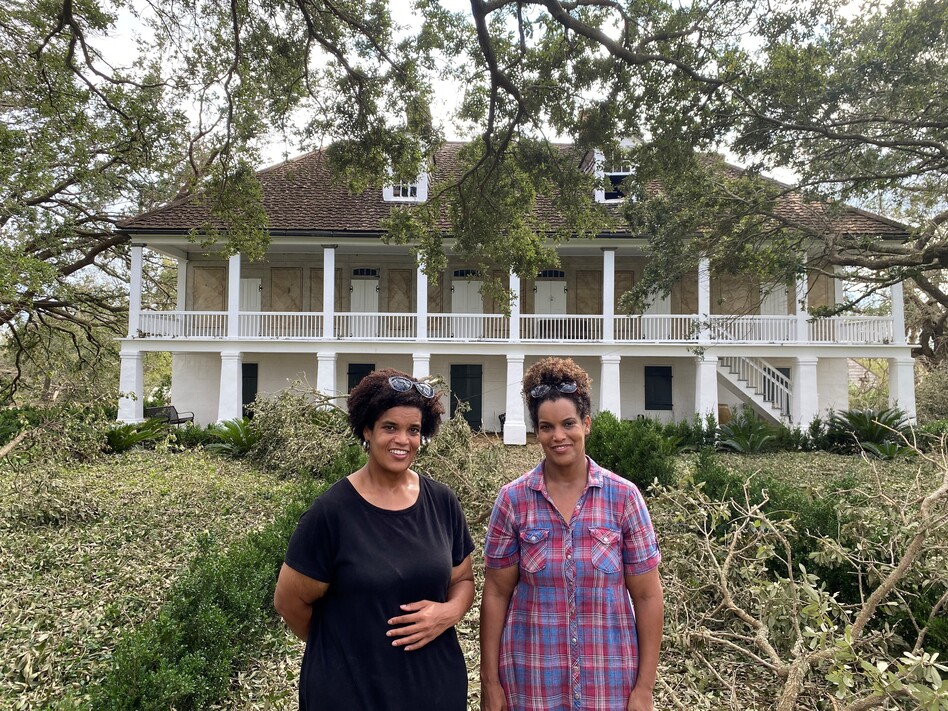 When the Banner family sought refuge from Hurricane Ida, which roared across the Gulf, they searched for the strongest building in the small community of Wallace, Louisiana, where they live. So they decided to weather the storm in the Big House on Whitney Plantation.

The banners are black. They have lived for generations on this rich alluvial soil on the banks of the Mississippi River, about 80 kilometers upstream from New Orleans. And they say their slave ancestors helped build this Creole plantation house 230 years ago for a German planter and slave owner named Jean Jacques Haydel.

As it turns out, it was in this white pillared rectory that the Banner sisters, Joy and Jo, and their parents, Harriett and William, fled last Sunday.

“Just being back here and having the experience of being in the hurricane in this house, literally it was our place of refuge,” says Joy Banner, pacing the land littered with fallen trees. , shattered building materials and broken limbs. “It really made me appreciate the skill, the craftsmanship of the slaves. They weren’t able to have this kind of house for their own protection when a hurricane hit them.”

The Whitney Plantation is not like other historic plantations located along the famous River Road that winds along the Mississippi. This acclaimed plantation museum, on what is known as the German coast, was the first in America dedicated to the narration of the slave experience. Joy Banner, who lives a mile and a half away, is the communications manager here.

She unlocks the padlock and opens a heavy door into the dining room, which is furnished with elegant period cutlery. It is sweltering inside due to the subtropical heat.

“And that’s where we were for 17 hours,” she said, looking around.

At one point the howling wind stopped and the family saw the sun and they thought the storm was over. But when the winds picked up again, they rushed towards the Big House. The eye of Hurricane Ida passed directly over the Whitney. In fact, St. John the Baptist Parish, where it is located, was among the hardest hit by the Category 4 storm and President Biden went there on Friday.

“It was so loud and it looked like the train was passing,” said Harriett Banner. “And you looked out and you saw the beautiful trees and they were everywhere. It was terrifying.”

But they were safe.

Joy Banner runs her palm along the cold plaster that covers the original brick walls over a foot thick.

Her twin sister, Jo, intervenes: “It’s so ironic to run to the Big House. I never imagined, as a descendant of the slaves, that we would run to this house.”

In 1819, sixty-one enslaved African men and women lived and worked on the Whitney Plantation. Workers at the big house were cleaning, drawing water from the cistern, cooking, ironing, serving food and drink to the family and fan them while they ate in the sweltering heat, according to Whitney’s website.

The beautiful structure, with its wide gallery on the second floor to catch the river breezes, is considered one of the best examples of decorated timber architecture along River Road. In one room, you can still see the mistress’s initials – “MH” – monogrammed on the living room ceiling.

“As much safety and security as the house has provided us,” says Joy, “there is always a feeling of – you don’t belong here, like the house isn’t for you.”

The original slave quarters still stand, but two sharecroppers’ huts that were brought onto the property were flattened by the fierce winds. The double rows of massive oak trees facing the house lost limbs, but survived. The dovecotes seem to be OK. The majestic whitewashed Antioch Baptist Church – which was built by emancipated slaves and moved here across the river in 1999 – was also heavily damaged. And the storm hit the Whitney Store, which operated until the 1960s, when the plantation was still growing rice and sugarcane for commercial purposes.

Harriett Banner thinks it wasn’t just the thick walls and cypress shutters that protected them. There is a tradition in southern Louisiana that is strongly Catholic that when a hurricane hits you sprinkle blessed bread on St. Joseph’s Day around your home to protect it.

“So I brought my Saint-Joseph bread and then when I arrived at the Big House I sprinkled holy water and I threw the bread around the house and I kept my rosary in my So I prayed and I said, ‘Lord, it’s in your hands’ and that’s what calmed me down, ”she said with a small laugh.

Whitney Plantation has closed for the time being; the research department donations for what will be costly repairs.

As for the Grande Maison, it lost one of the four fireplaces, a few cedar shingles and a few windows. But it weathered the storm just as it had been built.