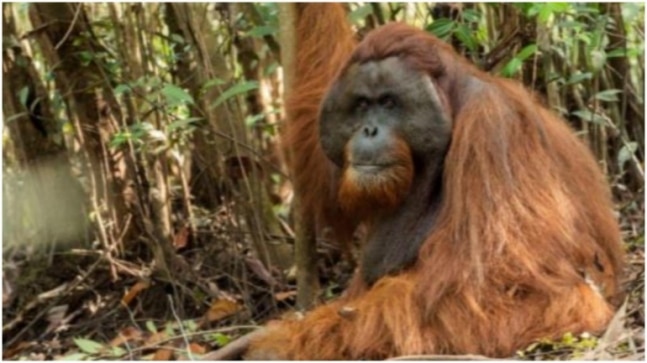 Orangutan found in oil palm plantation returned to the wild

The male orangutan, named Boncel and estimated to be 30 to 40 years old, was found on a plantation in the Indonesian part of the island of Borneo.

The male orangutan, named Boncel, is believed to be between 30 and 40 years old. (Photo: Reuters)

A Bornean orangutan found in an Indonesian palm grove has been rescued and returned to the forest, a conservation group said on Wednesday, the latest example of how habitat loss is putting pressure on the critically endangered animal extinction in nature.

The male orangutan, named Boncel and estimated to be 30 to 40 years old, was found in a plantation on the Indonesian part of the island of Borneo along with four other orangutans in early August, International Animal Rescue (IAR) said. in a press release.

“We found five orangutans (in the area) and we managed to relocate four of them in the wild, with the exception of this male orangutan who always remained in the plantation,” said Andiri Nurillah, a veterinarian working for the Indonesian branch of the IRA.

The great ape was stung with a tranquilizer at the Ketapang plantation in West Kalimantan province, before being caged and taken by motorboat down a river to a safer area of ​​the forest.

Boncel was in good condition when he was found, except for a broken finger and other minor injuries, Nurillah said, adding that his move went well.

The release came shortly after two more Borneo orangutans were rescued from captivity on the island of Java and sent to a rehabilitation center in Borneo to assess whether they can be released into the wild.

According to the World Wildlife Fund, it is estimated that around 100,000 Borneo orangutans are still in the wild, with the population falling by more than 50% in the past 60 years.

Animals have suffered from illegal poaching, as well as habitat destruction due to large-scale logging and the replacement of forests with cash crops such as palm oil.

Click here for IndiaToday.in’s full coverage of the coronavirus pandemic.

The Grove at Plantation Hills: Safe and Sustainable Refuge in the Tagaytay Highlands