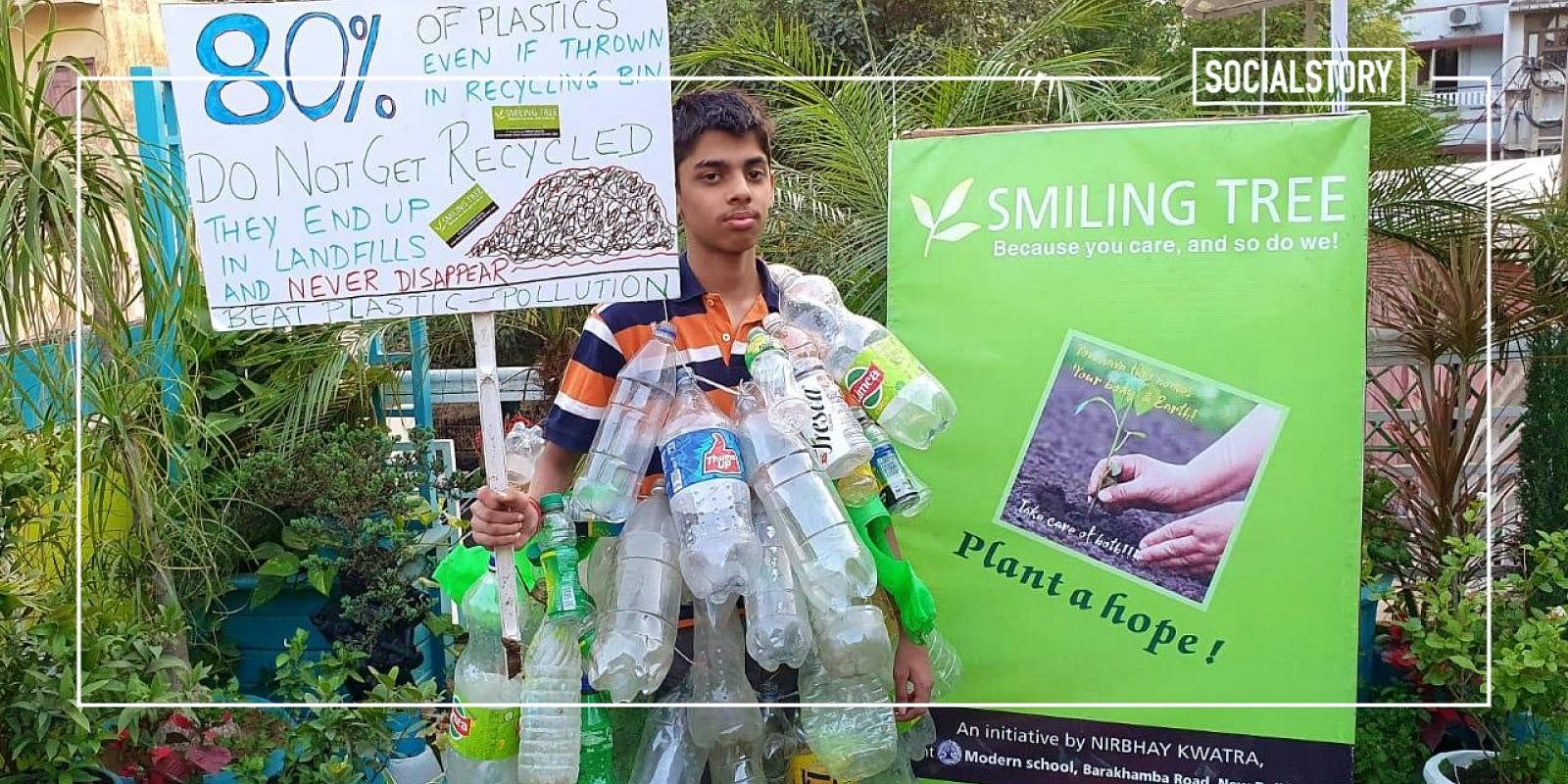 In 2012, Nirbhay Kwatra, a 10-year-old student at Modern School in Delhi, decided he wanted to do something to save the planet. His vision was to garner the support of people from all walks of life to form an important “green collective” and plant trees. He also wanted to raise awareness about the use of clean and renewable energies.

As a major “first step” for his ambitious project, a “GREEN SMILING TREE WALK” was organized on January 15, 2012 in Lodhi Gardens, Delhi.

The event was a success, according to his father Mukesh Kwatrabecause people of all ages were both curious and surprised to see a child launch a campaign. Mukesh has since taken over the initiative while Nirbhay was busy with his studies.

Instead of generic messages to save the planet, Smiling tree asks its members to adopt a plant, where each individual is given a simple task: to plant a tree and take care of it.

According to Mukesh, unlike usual plantings where plants and saplings are forgotten after sowing, Smiling Tree takes care of every life it plants in the true spirit of gardening.

The company has also partnered with the government for planting campaigns in the Namami Gange program, a national Ganga river clean-up mission, with Karur Vysya Bank, Rotary Club, Maruti Suzuki’s Platinum Motocorp and many others. to carry out planting campaigns and / or donations. plants at various other locations in and around Delhi.

“We will always strive to protect the environment as a whole. Whether it’s climate change, deforestation, the unsustainable use of natural resources, the use of plastic, gas emissions, the burning of fossil fuels or any other issue, they all constitute a great concern. We aim to make our Earth green and we will always do our best to do so, ”Mukesh said.

Celebrating cricket through the environment

Smiling Tree has created several landscaped gardens and innovative vertical gardens. One of them is the “Hall of Fame”, a tribute to Indian cricket and a mark of respect for the vintage legacy of Team India and the Roshanara Club in cricket.

“On a green landscape, it presents art installations such as three giant cricket bats, balls and stumps, tricolor stones flowing from corner to corner, gloves in the background and flowers and plants. exquisite all around. It flaunts the historic achievements of Indian cricket, as the “Men in Blue” proudly displayed the tricolor on the world stage with three World Cup victories in 1983, 2007 (T-20) and 2011, so that the three bats have the names of the respective team members as a sign of respect, ”says Mukesh.

Mukesh, an environmentalist, has also set up a terraced garden at his home, which in his words is “a humble tribute to the god of cricket”, Sachin Ramesh Tendulkar. Along with a variety of exclusive plants meticulously arranged there, it has a vertical garden where around a hundred used plastic bottles have been recycled into planters.

As Sachin had marked 100 international centuries during his illustrious career, thus, “each bottle is a memory of a century marked by him,” explains Mukesh. There is a plastic sticker on each bottle representing the points scored, the country he was playing against, the date and location he marked the Century.

There is a large lighted sign in the center with Sachin’s photos and one of his famous quotes, “Don’t stop chasing your dreams, because dreams come true”. There is another sign on the side with Sachin in full flow in the colors of India and a small description of the vertical garden.

According to Mukesh, Smiling Tree has successfully planted over three million plants and trees over the past ten years in and around Delhi-RCN.

However, motivating people to adopt trees and avoid using plastics has been a challenge. Smiling Tree was funded solely by Mukesh. Now the team, which includes seven people from family and friends, is seeking donations to expand its operations.

Mukesh says the goal of Smiling Tree is to plant trees and raise awareness of sustainable living. He also wants to educate children about environmental issues and help farmers access and learn environmentally friendly farming practices.

This once criticized Anchorage Road landscaping project has really paid off

SC rice plantation for sale in Colleton County near Beaufort